Cinnabar Island is a small island town in southwestern Kanto. It is located between the oceanic Routes 20 and 21 that require Sea Skim to reach. Route 20 is located to the east, and Route 21 to the north. 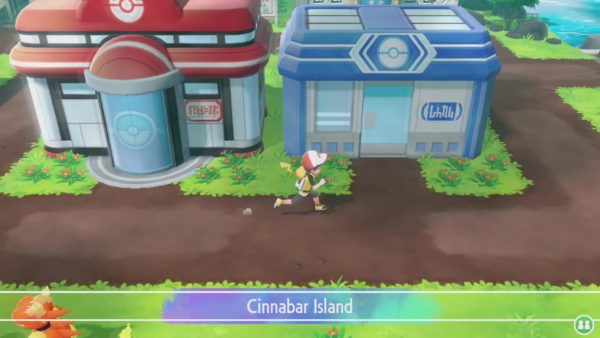 Your first stop should be the Pokemon Center at the southeast corner of the island. Speak with the Punk Guy in the back corner of the lobby to trade Pokemon. He will offer his Alolan Grimer for your Kantonian Grimer. Alolan Grimer are Dark/Poison-type Pokemon, while the original Kanto version is simply Poison-type. Wild Grimer can be found at the Pokemon Mansion or at the Power Plant. Make sure you save before the trade because the Pokemon you receive will have random stats and a random nature.

The Cinnabar Lab is located at the southwest corner of the island. There are only three rooms from the lobby. Enter the second room and speak to the scientist on the computer. He will give you TM02 Taunt, a status move that forces the opponent Pokemon to use physical or special attacks only.

The scientist in the back of the third room will revive ancient Pokemon from the DNA found in fossils. The only three fossils found in Pokemon Let’s Go Pikachu and Let’s Go Eevee are the Old Amber, Helix Fossil, and Dome Fossil. The Old Amber can be found in the Museum in Pewter City, and the other two can be found in Mt. Moon after battling the Trainer before Team Rocket. Later in the game, you might be able to find all three! Make sure you save before reviving the Pokemon. It will have a random set of stats and a random nature.