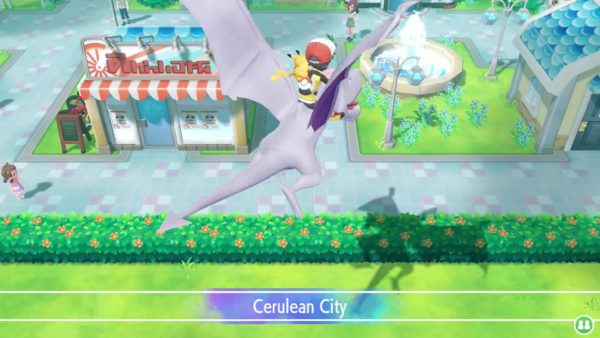 A returning feature to Pokemon Let’s Go Pikachu and Let’s Go Eevee is the ability to take a Pokemon out of its Poke Ball to follow on your journey. Simply go to the party menu and select which Pokemon you wish to take out of its Poke Ball. The Pokemon will interact with the world and might even find hidden items! Unfortunately, your Partner Pokemon will not be able to follow you after the introduction quest.

All Pokemon should be to scale in Let’s Go Pikachu and Let’s Go Eevee. That means some will simply follow you on your adventure, and others will allow you to ride them if they’re big enough!

After becoming Pokemon League Champion, the Pokemon you can fly on will be able to fly over ledges and some barriers between towns. Additionally, Articuno, Zapdos, Moltres, Charizard, and Dragonite will begin to appear randomly in the skies of Routes 1-25. In order to reach them, you must fly on the back of a large Pokemon.

After becoming the Pokemon League Champion, you will receive a notification that your world has expanded. The Pokemon that can fly will be able to fly over ledges and other obstacles throughout Kanto, making travel much easier. However, you will still have to enter certain route houses, such as the four gates surrounding Saffron City.