Kanji Tatsumi is a troublemaker who is said to have destroyed a biker gang while in middle school. He is a lone wolf, and one grade younger than the other members of the party.

Kanji’s family runs the Tatsumi Textiles Shop in the Central Shopping District. You can find him there during holidays. 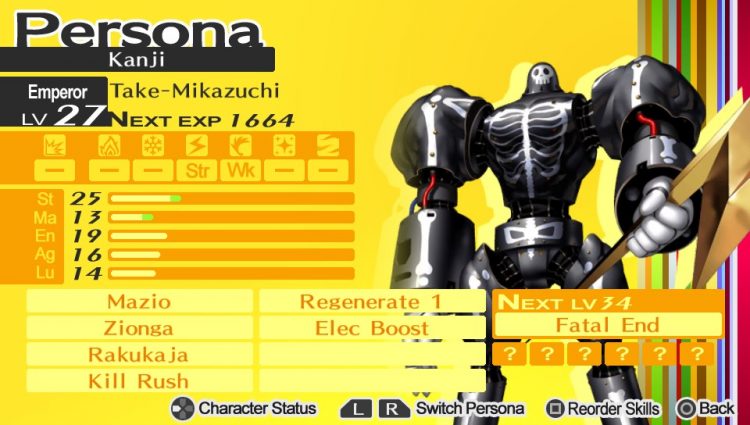 Take-Mikazuchi is obtained once Kanji Tatsumi joins your party following completion of the Steamy Bathhouse dungon. Take-Mikazuchi is Kanji’s Initial Persona. If you maximize the Emperor Social Link with Kanji, it will transform into Rokuten Maoh. 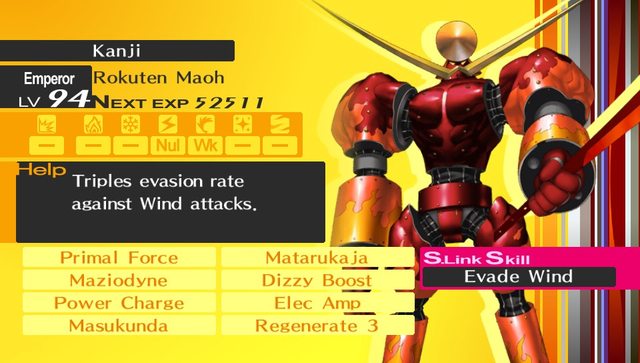 Rokuten Maon can only be obtained once you maximize the Emperor Social Link with Kanji Tatsumi. Kanji’s previous persona, Take-Mikazuchi, will automatically transform into Rokuten Maoh, carrying its level and skills.

Its default level is carried over from whatever your Kanji’s Take-Mikazuchi was at when he transformed.

Spending Time with Kanji during the Winter Event– if you have already maximized the Emperor Social Link–will cause Rokuten Maoh to transform into Takeji Zaiten. 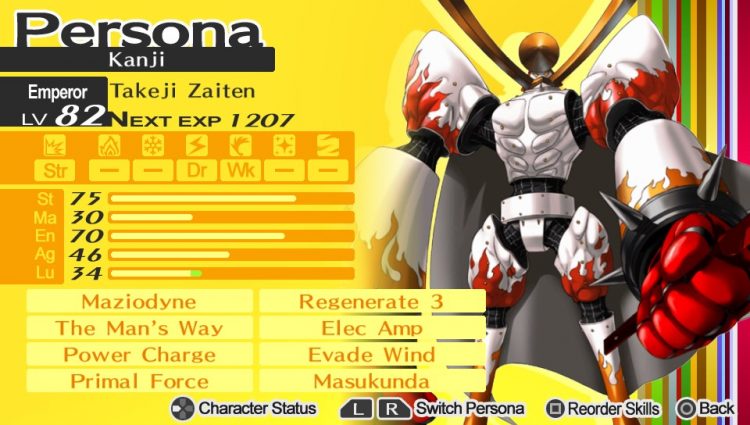 Takeji Zaiten is the third and final persona form of Kanji Tatsumi.

Takeji Zaiten can only be obtained during the Winter Event (post January 11th) once you have maximized the Emperor Social Link with Kanji to Rank 10. Rokuten Maoh will automatically transform into Takeji Zaiten when you Spend Time with Kanji one last time.

Its level is carried over from Rokuten Maoh as well as all skills. However, once you receive Takeji Zaiten, the persona will learn a new ability called “The Man’s Way” which has a chance to inflict Down/Dizzy on all foes.

Once you have obtained Takeji Zaiten, Kanji also has a change in resistances– he now will absorb Electric damage (up from blocking) and resist Physical damage. However, Takeji is now weak to Wind attacks.