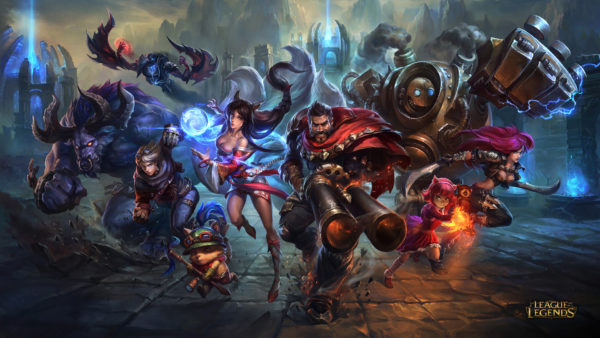 Champions are the various characters you can choose to play with in League of Legends. Each specializes in different fighting styles and uses unique attacks and abilities. Over the past ten years new Champions have been added to the game. Unfortunately, I won’t be listing every single Champion in this guide because it would be far too costly to buy them all, and some Champions get re-worked every once in awhile to balance the game. This guide will be focusing on general information every Summoner needs to know, instead.

To unlock a Champion, you must use either Blue Essence or Riot Points. BE is the in-game currency and RP is the currency you can only purchase with real money. The price of Champions has increased throughout the years, but the Riot Points price has stayed the same for new Champions since 2013. Each new Champion can be unlocked for 975 Riot Points. Alternatively, a rotating list of Champions will be Free-to-Play for all Summoners each week. These free Champions reset each Tuesday. 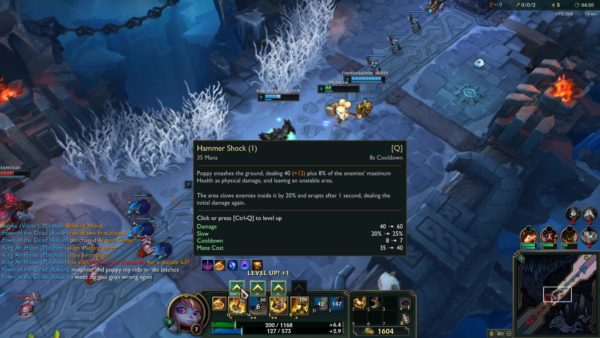 All Champions are set at Level 1 at the beginning of a Summoner’s Rift game; at the start of an ARAM game, Champions are set to Level 3. A Champion’s max level is capped at 18. Earn experience points by attacking enemies, destroying structures, killing monsters, assisting teammates, using items, and much more. The purple experience bar can be found to the right of your Champion’s picture in the box at the bottom of the screen.

Level up a Champion to increase their stats, earn gold, and unlock new abilities. Most Champions can level up their three main abilities an additional four times. However, some abilities will prevent you from maxing them out before others to promote a more balanced game.

Reach level 6 to unlock your Champion’s Ultimate Ability, which is their most powerful technique. The ultimate can then be powered up at levels 11 and 16 for an additional two boosts. 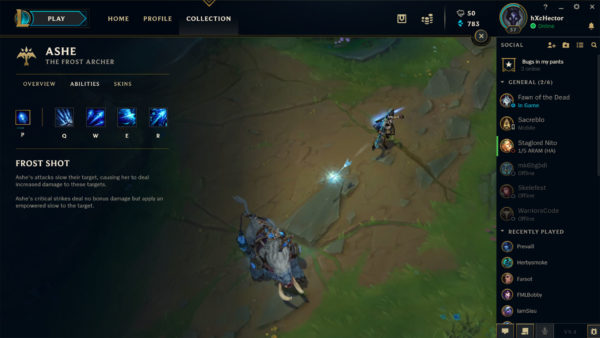 Each Champion has five different abilities: A passive ability, three basic abilities, and an ultimate ability – shortened to passive, ability, and ultimate. This is often the main feature people look to when choosing a Champion. Very few Champions are alike, making it a little tough to remember who specializes in what, and which character can easily overthrow another. For now, let’s just talk about the five abilities.

The passive is the base ability a Champion performs. Passive abilities are often simple attacks, but sometimes they have other special features. The three main abilities must be unlocked as you level up in battle, but one basic ability can be unlocked at the beginning of the match.

The last ability is the Champion’s Ultimate Ability – written as Ult for short. When a Champion reaches level 6 in battle, they will be able to unlock their ultimate ability. Just as the name implies, it is a very great technique that can easily change the tide of battle, but the ult often has an incredibly long cooldown period. The ultimate ability can be powered up at levels 11 and 16.

All three normal abilities and the ultimate can be leveled up to increase their power and decrease their cooldown period to use them more often. Look beneath the ability buttons for gold circles. These represent the levels each ability can reach. Power up a manuever each time your Champion reaches a new level.

Every Champion specializes either in physical or magical damage. This is listed on the Champion’s page under their overview section. The style is displayed by a slider, with physical on the left side and magical on the right.

In addition to specializing in magic or physical damage, every Champion fits into at least one of six roles: Assassin, Fighter, Mage, Marksman, Support, and Tank. These different roles, the lanes they often take in game modes, and a simple description is listed in the table below.