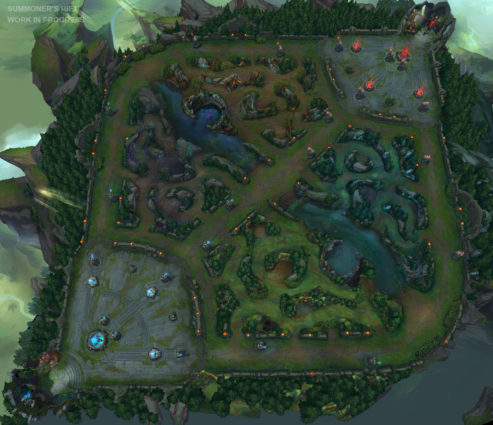 Summoner’s Rift is the original game mode in League of Legends. Five Champions battle Five Champions in a giant map. Three primary lanes separate one base in the northeast from the other base in the southwest. A thick, winding jungle filled with fierce monsters is laid between each of the primary lanes (four sectioned forests at the north, south, east, and west), and a river housing two elite beasts divides the map in half from northwest to southeast. The objective of the game is to destroy the Nexus in the other team’s base. 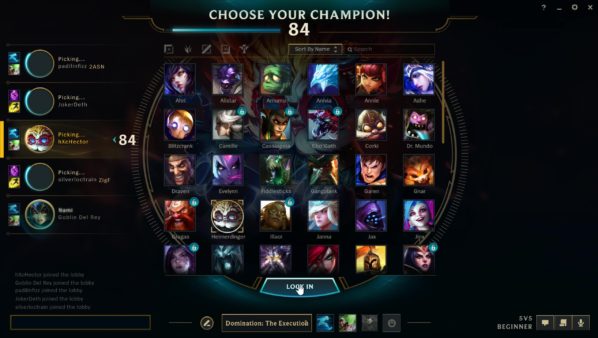 Draft Pick allows a Summoner to choose a role to play in the game instead of deciding among your teammates in the chat. The five options include the three lanes: top, mid, and bottom; Support, which often helps the bottom lane Champion; and Jungle, where a Champion battles the various monsters and helps the team score ganks throughout the map. The table below is a quick breakdown of the different Champion roles and the lanes or areas they are commonly assigned. Exceptions can be made if the player is skilled enough.

Home Base and Items 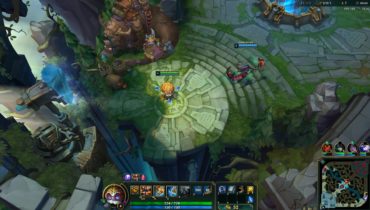 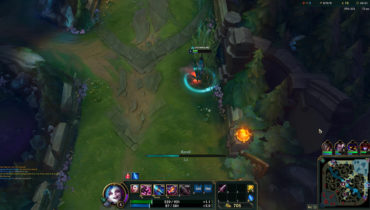 Channeling back to home base will also return you to this spawn platform where items can be purchased and Champion health and mana will quickly regenerate. If an enemy tries to walk onto this spawn point, they will take enormous damage and possibly die.

Near the spawn platform is the Nexus where all Minions come from. Once this structure is destroyed, the game is over! There are five doors friendly Champions can enter and exit, but two of these passages have magic spells preventing enemy Champions from entering.

Three primary lanes separate one team’s base from the other. Two Turrets will guard each lane from the the center of the map to each base. Since this map is so large, the two Turrets will be spread out far from each other. The first set of Turrets will have an extra layer of armor. This armor plating will fall after 14 minutes if it has not been destroyed. 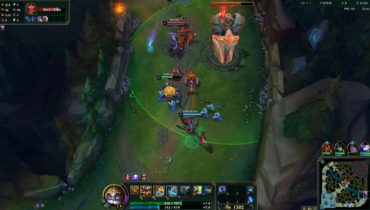 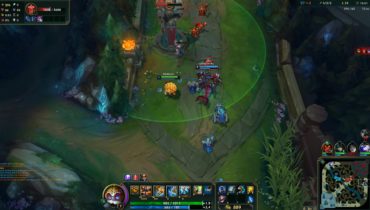 A third Turret will guard the entrance to each team’s base. On the other side of this Turret is an Inhibitor. Destroy an enemy Inhibitor to allow Super Minions to spawn in that particular lane. These stronger Minions will make it easier to destroy structures and push Champions back. After a short time, the Inhibitor will repair itself and respawn, preventing Super Minions from spawning. 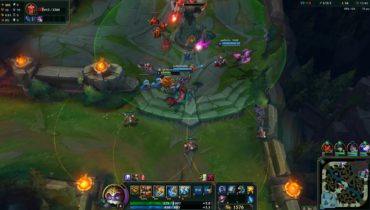 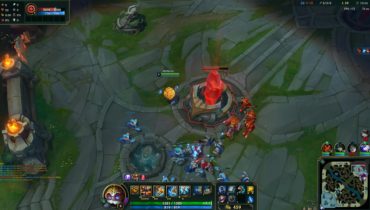 The final structure is the Nexus, and it is located deep within each team’s base. The Nexus will be guarded by two Turrets positioned near each other. The Turrets defending the Nexus have less health than the Turrets set throughout each lane, but their positioning will allow for multiple hits on an enemy unit. 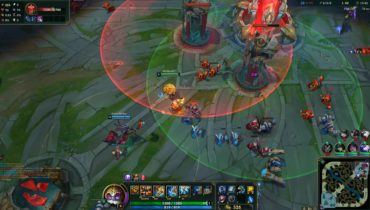 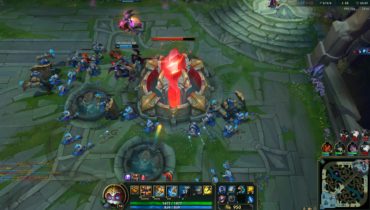 Four winding Jungles are laid throughout the lanes of Summoner’s Rift. These can be found on the north, east, south, and west parts of the map. Specific Champions use the twisting paths and thick grass to get the upper hand on others. 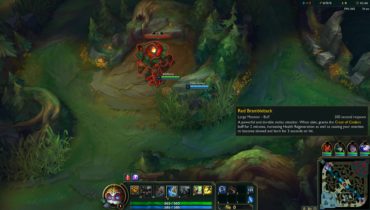 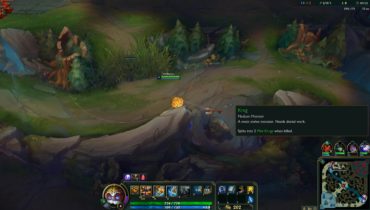 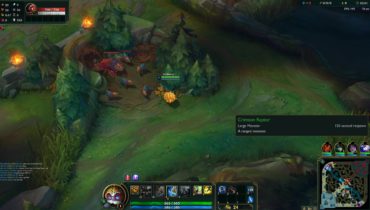 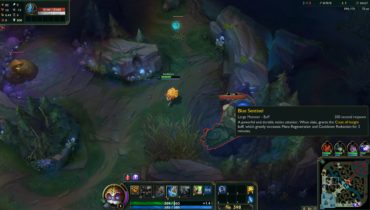 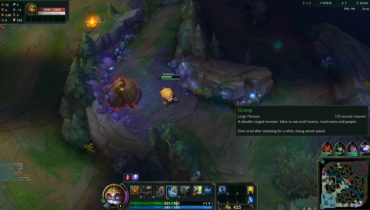 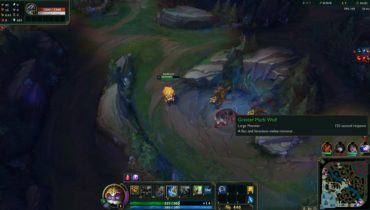 The jungles to the north and south feature red monsters, and the jungles to the west and east hold Blue monsters. See the table below for a breakdown of all six monster camps and the rewards they offer. Three camps can be found in each jungle section. 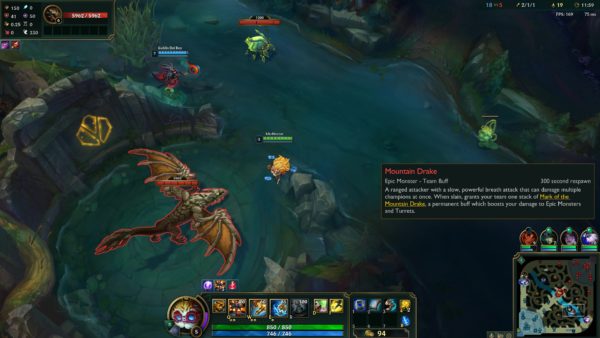 Dragons can be found in a small base near the southern point of the river in Summoner’s Rift. They first appear at the 5 minute mark in-game, and will spawn 300 seconds after being slain. This elite monster will not fight unless it is attacked first – and battling Dragons is best done with a group. 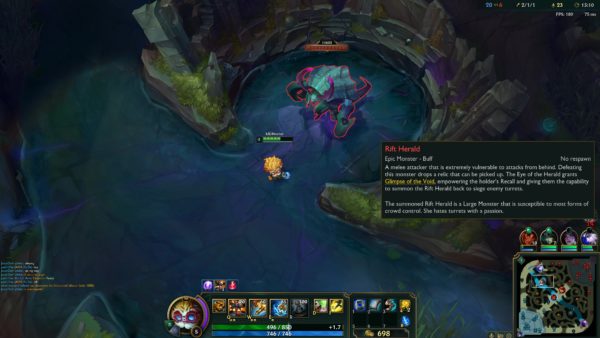 The Rift Herald is one of the elite monsters in Summoner’s Rift. It will appear in a small base at the northern side of the river after 10 minutes in-game time. Once slain, the Rift Herald will not respawn again.

This bug-like beast will use strong melee attacks to deal massive damage to any Champions directly ahead. It has great defense and will quickly regenerate health. The best way to defeat the Rift Herald is to attack with a group of Champions – it is also extremely vulnerable to attacks from behind. 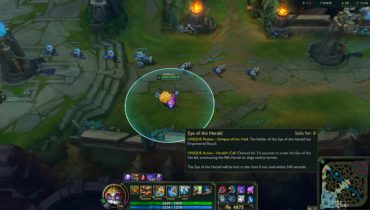 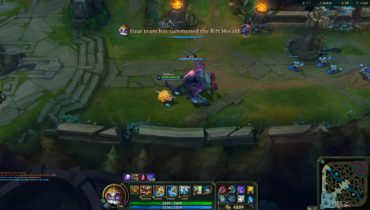 The elite monster will rush forward doing damage only to enemy minions and turrets. They can cut a turret’s health in half with a single thrust forward, then deal massive damage with basic physical attacks. 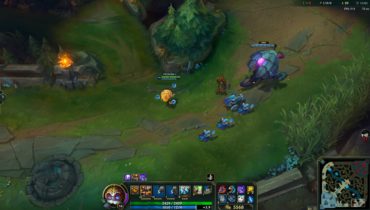 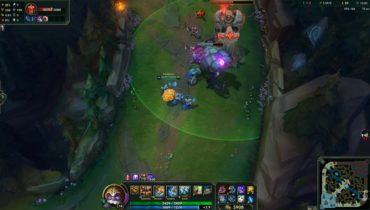 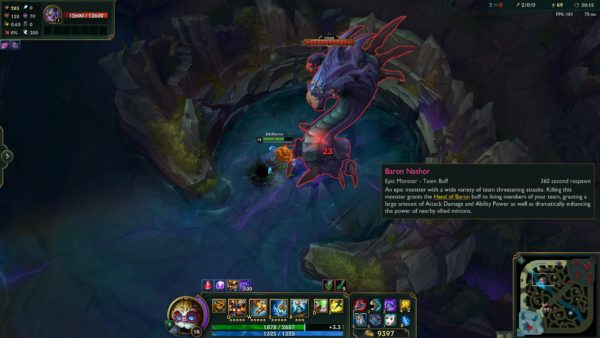 Baron Nashor is the strongest elite monster in all of League of Legends. It will appear in the base at the northern part of Summoner’s Rift. This is the same location where the Rift Herald originally spawns; however, Baron Nashor will not appear until the 20 minute mark in-game. 360 second respawn.

The Baron is incredibly tough, dealing massive physical and magical damage. Not only with the first attacks deal damage, but they will continue inflicting damage over time. Meanwhile, Baron Nashor’s own health will quickly regenerate, and it has so much health that all five Champions will most likely be needed to defeat the beast.

Defeat Baron Nashor to receive the Hand of Baron buff to all living Champions. This boost increases attack damage and ability power while reducing recall times. Additionally, all nearby minions gain increased damage and range on their attacks, faster movement speed, and better armor to reduce damage from enemies. Unfortunately, the Hand of Baron buff will disappear once the Champion is killed.