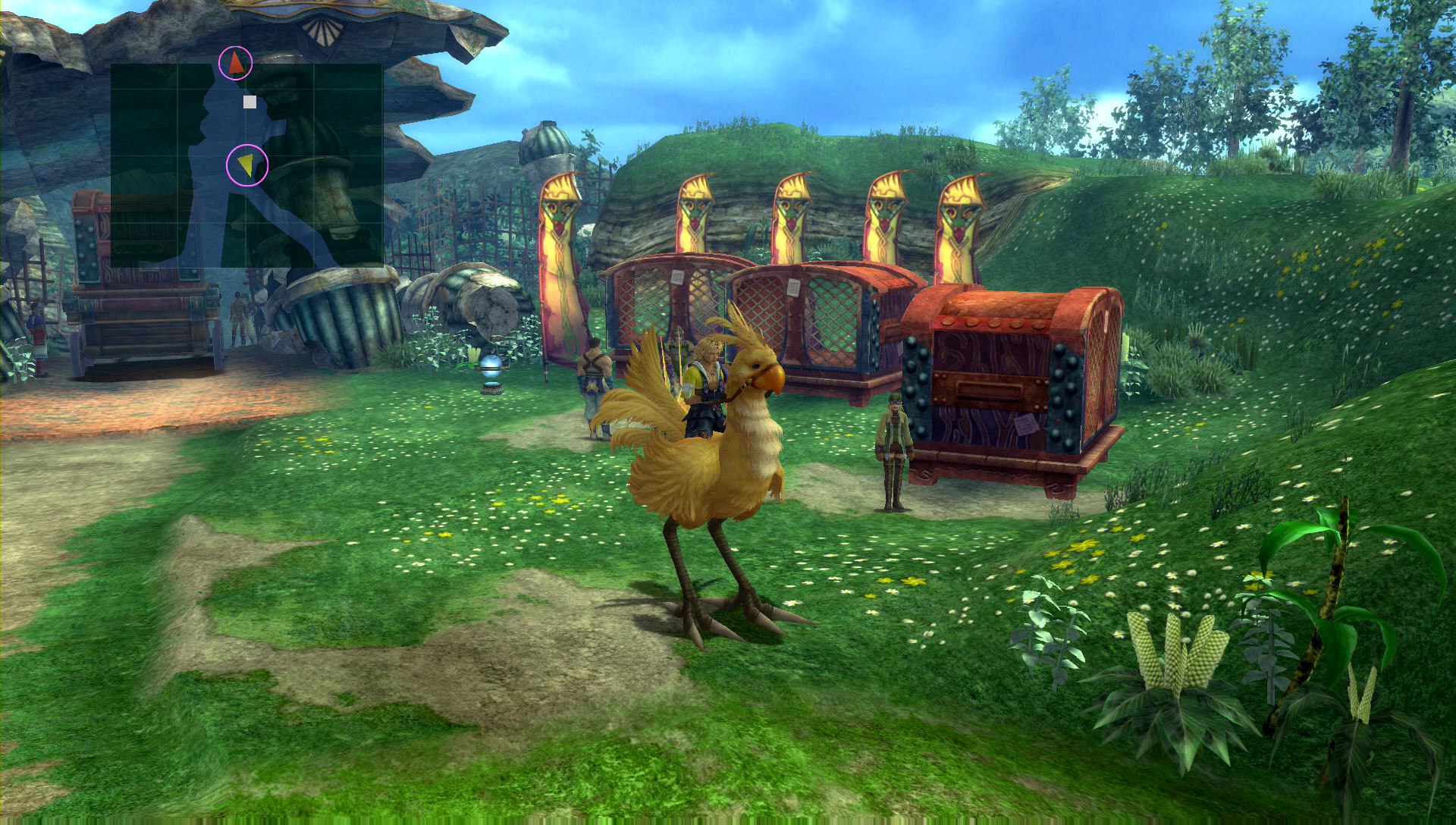 [toc]
Now that you’ve played your very first game of Blitzball, the Traveler’s Save Sphere will reach Level 2. You can transport back to Luca’s Blitzball stadium and play almost any time. You can also recruit new teammates around Spira. See the Blitzball section for more info.

Mi’ihen Highroad is basically a long, straight path. Don’t forget to use Kimahri’s Lancet ability on the Bomb and Dual Horn fiends to learn new abilities.

Walk up the long road to the north to learn about armored fiends and the piercing ability on weapons. A short battle tutorial will play out with Auron. Both Auron and Kimahri use weapons with the piercing ability. Side Note: Make sure to talk to everyone on this road. They will give you a variety of useful items!

Examine the statue up ahead to learn more about the Crusaders. Further ahead is a large ruin. Behind the ruin is a treasure chest with the Ice Brand weapon inside. Continue down the road until you see a woman in green on the right side. This woman is a summoner named Belgamine.

Belgamine will challenge you to an Aeon battle. This is completely optional! Speak with her to battle your Valefor against her Ifrit. Don’t accept unless you have Valefor’s Overdrive gauge charged before the battle.

When you’re ready, continue to the next section of the highroad.

You can find a treasure chest near the start of this area, it’s located behind the Chocobo. Inside the chest is a Remedy. To the right of the chest is a little girl and her mother. They’ll give more information on Sin.

The Central area is pretty non-eventful. Remember to speak to everyone along the road to get some great items! When you see a small area on the right side of the road, search for a treasure chest containing 2000 Gil.

Continue along the road until you see a large truck. A short scene will play out, and some familiar faces will run off to the right. Go over and talk to them for a little more back story.

A short distance ahead is a woman named Shelinda. Speak with her to learn more about machina in Spira.

A treasure chest containing three Eye Drops is located right before the end of the road. With those in hand, continue on to the next part of Mi’ihen Highroad.

The party will rest at Rin’s Travel Agnecy, an Al Bhed Inn. You can buy some weapons and items from the clerk behind the counter if you like. Afterwords, exit the shop to speak with Yuna.

Tidus will return to Rin’s Travel Agency after the event between Yuna and him. A boy will give you a Lv. 1 Key Sphere when you enter the lobby again. Try to exit and you’ll meet Rin, the owner of this inn. He will give you Al Bhed Primer vol. VIII and two Mega-Potions.

A commotion will break out outside. Save before exiting the building. A boss battle will begin immediately. 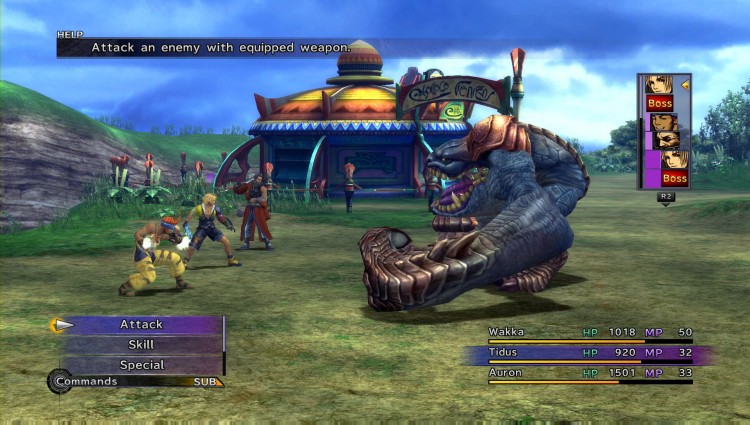 This boss battle is a little different from the others. It’s possible to lose without dying and win without killing the boss. The Chocobo Eater can push the entire party off the cliff if you don’t deal enough damage. If this happens, the team will not get any AP or rewards. However, if you deal a little over 1000 HP of damage to the Chocobo Eater, it will fall on its back. Deal about 500 HP of damage when it’s on its back to push it forward. Push the Chocobo Eater off the cliff to finish the battle at earn two Lv. 1 Key Spheres, along with the other items and Gil you would normally earn. If you simply kill the Chocobo Eater, you will not get the Key Spheres. 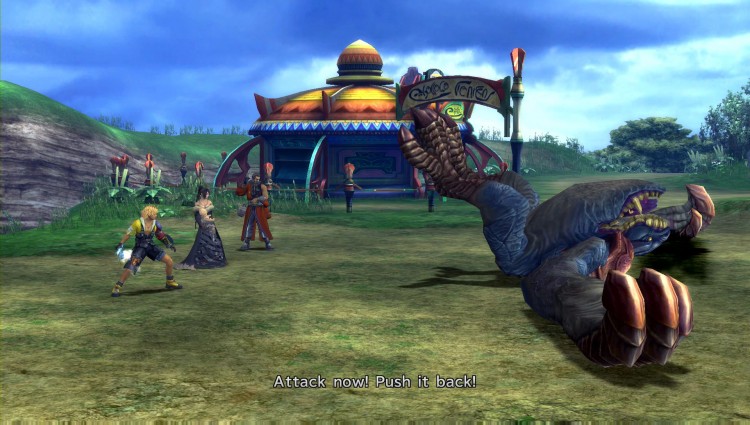 The Chocobo Eater is weak to fire, so allow Tidus to cast Haste on Lulu before she uses a barrage of Fire spells. This boss is armored while standing, which means weapons without the piercing ability will do less damage unless the Chocobo Eater is on its back. Remember, Auron and Kimahri are the ones who use piercing weapons. You can also use Auron’s Power Break skill to reduce physical damage, or Wakka’s Dark attack to blind the beast. Make sure everyone gets a turn in the battle to earn some AP.

After the battle, Rin will allow you to rent Chocobos for free. Riding a Chocobo allows you to reach areas you normally couldn’t reach, and there won’t be any random battles. Of course, no random battles also means no experience earned. Continue onwards when you’re ready.

There’s nothing on this road. Continue on to the next.

Look for the yellow Chocobo feather around the first turn. Examine it (press X) to get your Chocobo to reach a treasure chest with a Heat Lance inside.

Follow the road a short ways to find the Al Bhed Primer vol. IX on the ground. This book is a short distance before the two people. With the book in hand, ride along the road to the next area. 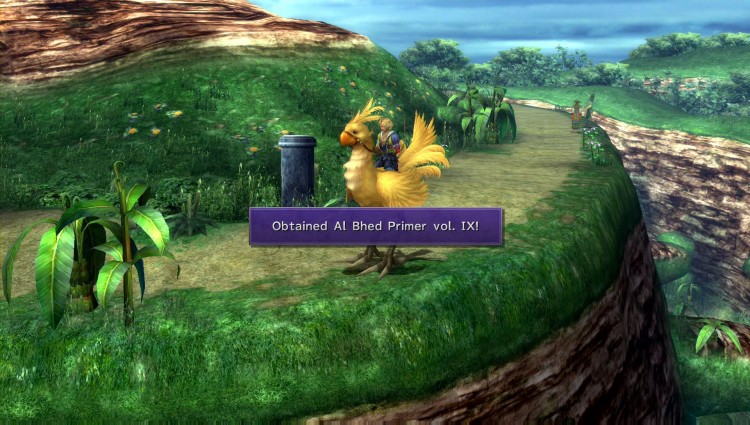 You can go down two different roads from the North End. Before going anywhere, make sure you grab the two Hi-Potions from the treasure chest.

The path to the north leads to Mushroom Rock. Before going on, head down the road to the southeast.

Once again, look for the Chocobo feather to reach some goods. This feather isn’t as easy to see as the last feather. This feather is near the south end of the road. See the pictures below for an idea of where to find it. This will lead you to the Thunder Blade and the Scout weapons. Continue south to the next area after collecting the items.

Follow the path about a third of the way to the south. Look for another Chocobo feather in a small corner on the right side of the road to reach a treasure chest with a Fortune Sphere inside.

Further south is O’aka XXIII. You can buy some weapons and items or lend him some Gil. Warning: This is the last time you can lend O’aka any Gil! Make sure your total amount of loaned Gil reaches 10,001 or more!

At the end of the path is the Mars Crest key item. This will be very useful much later on when collecting the Celestial Weapons.

Now that everything has been collected, return to Mi’ihen Highroad – North End to continue on. Walk to the carriage after speaking with Donna to clear the path to Mushroom Rock. The men will still say “I’m sorry I can’t let you pass” if you try to continue to Mushroom Rock. Walk back south to start a cut scene.