Omega Ruins is the toughest dungeon in Final Fantasy X. It can only be found using the search option at the NavMap in the Airship. X Coordinates: 69-75; Y Coordinates: 33-38. If your team is under-leveled, stick close to the save sphere and buff up everyone. Hopefully you have some Celestial Weapons to boost your power and get extra AP. Note: You won’t be able to defeat the final boss unless you have the Auto-Life spell or extreme luck. 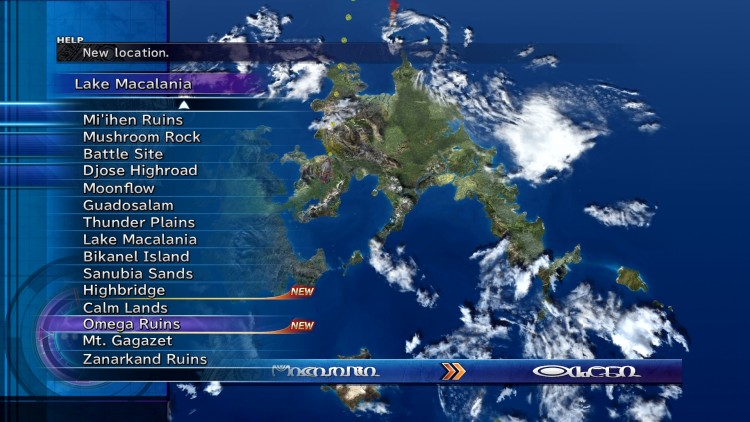 Unlike all of the others areas in the game, this area will not be mapped until you venture out. Try searching each corner to find a few treasure chests. Some contain very rare items, but others may contain Fiends. If you get the one with the Fiend, the other treasure chests will disappear. Open them in the right order and they will all (usually) contain random, awesome items and a Lv 4 Key Sphere.

The first set of treasure chests can be found to the east. Unfortunately, I didn’t write down which chest I opened first, but it contained a fiend!

Return to the save sphere and go down the hall to the west. The path will twist upwards to another set of treasure chests. Take the left and right chests, but leave the middle!

Continue down the path to the north until you reach a fork in the road. First, take the path to the west to find three more treasure chests. Open the left and middle chests to avoid the fiends.

Return to the fork in the road and take the path to the east. Four treasure chests will be in a circle here. Only open the top left and top right chests, as the other two contain fiends. A few steps north of these chests is the Al Bhed Primer vol XXVI. It’s hard to see in the dark, so refer to the images below.

A glyph is located in a corner further northwest. Touch it and return to a stone glyph south of the four treasure chests from before. Touch this glyph to raise a bridge further south that leads to a treasure chest with a Teleport Sphere.

You might want to save your game now before continuing on. Return to the area where the four treasure chests were and go to the northeast. You should find an unusual looking pad that you can step on to take you to an elevator. A boss will be waiting on the elevator, so be prepared. Try to equip armor that protects your team against confusion, petrification, and silence if they use magic attacks. 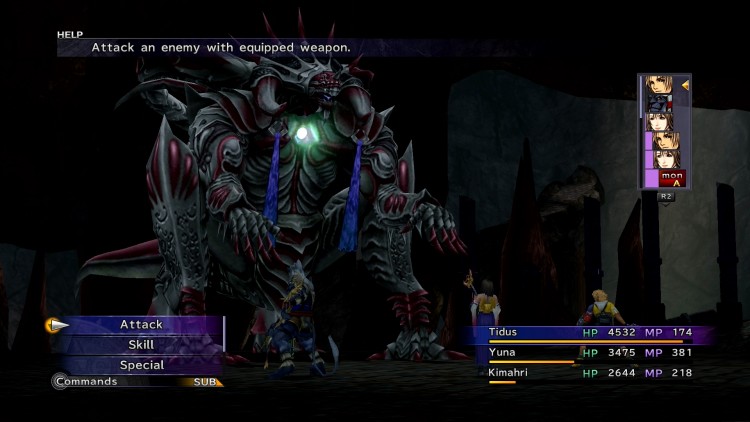 The first thing you should do is steal from this boss. You will be able to get 10 Doors to Tomorrow. Next, boost up your team with spells and skills like Protect, Shell, Haste, Focus, and Cheer.

Ultima Weapon will attack with physical attacks and try to inflict bad status conditions in the beginning of the fight. After a few attacks, the boss will use a non-elemental magic attack called Core Energy that will damage one character. Near the end of its life it will use Holy, which is a very powerful magic attack to one character.

There isn’t much of a strategy to this fight since Ultima Weapon is immune to pretty much everything. Just attack with whatever your character specializes in. If using magic attacks, try using Holy, Flare, or Ultima since the elemental attacks do less damage.

After the battle, you will reach a new area. Each junction in this area has a strong Fiend you must battle from the Omega Ruins. Head west first to find a Friend Sphere in a treasure chest, then return east and follow the path north. You will eventually reach the final boss, Omega Weapon. Equip armor with the Auto-Phoenix abilities before this battle! 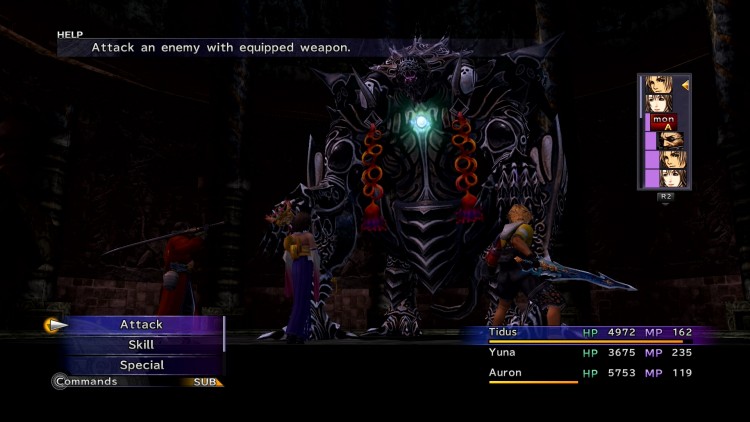 Omega Weapon is immune to everything. Make sure your team is buffed with magic like Haste, Shell, Protect, Focus, and Cheer. Also, make sure you use Kimahri’s Lancet attack to learn his most powerful Overdrive.

The Omega Weapon uses a number of attacks, one which is incredibly powerful and will almost surely wipe out your entire team. This is where the armor with Auto-Life spell comes in. This white magic spell will allow you to come back to life and keep fighting.

Use physical attacks and non-elemental magic such as Flare and Ultima weapon fighting the Omega Weapon. He will absorb all elemental and holy magic attacks. Give it everything you’ve got and try to take down this very tough boss. After the battle, open the treasure chest nearby to obtain a Magic Sphere.