The weapons in Call of Duty Black Ops are very similar to the weapons of the past Call of Duty games. In Black Ops you can created a class like past COD games for online multiplayer. You can choose a primary weapon, secondary weapon, and three sets of equipment.

When choosing the right gun there are a few stats to consider on each weapon. They are power/damage, penetration power, range, accuracy, fire rate, and mobility. A stat I will quickly mention is the reload time. All weapons have different reload times depending on how much ammo is in the gun. Some weapons must reload one round at a time. Other weapons take longer to reload if you full emptied the magazine instead of leaving one round in the chamber. You also have to add time for the gun being raised. I gave the quickest to longest reload times for each gun. Reload time isn’t that important of a stat. The other stats are very important and should be taken into account:

Damage/Power
You can’t kill people if your gun doesn’t do any damage! One thing to take into account when choosing the right gun is the amount of damage is does. I try to list the damage values for each bullet on each gun. I tested every weapon myself and estimated the damage values in comparison to past games. I should note that headshots give an extra 40% damage for each bullet that hits the head.

It’s not always the gun that you must take into account when firing through surfaces. There are many different surfaces in a Call of Duty game, but there are usually only 3 types that vary in thickness. The thinnest surfaces are things like glass, plywood, and sheet medal. All weapons can penetrate through those surfaces. The surfaces that has the medium thickness are usually walls in houses. The thickest surfaces is stone or concrete. No weapon can penetrate stone/concrete unless they have the hardened perk. Even then the pistols and shotguns cannot penetrate. Through my research I would say that each thickness of surfaces takes away a third of bullet power.

Range
Your gun may have killed someone quickly at point blank range, but it took longer down range. The range stat may be the most overlooked stat in the game. Each gun, with the exception of sniper rifles and some LMGs, have certain power at certain distances. The further away you are from the target, the weaker your gun is. Lets say I give you the gun stats 30-40 damage with 20-50 Meter Range. This means that the gun will kill someone with 3 bullets up to 20 meters. The damage will be between 39-41 when it’s under 20 meters, but once it reaches 50 meters or more the weapon will kill in 4 bullets (be 30 damage). Suppressors reduce the range in all guns except sniper rifles, instead the power is reduced. Lets not forget to take accuracy into account while firing down range. 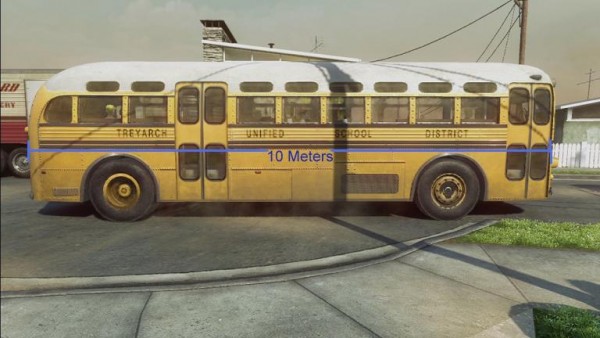 The bus on nuketown is roughly 10 meters long in the Call of Duty World.

Accuracy
So you have a lot of power in your gun, but you can’t hit anything with all the recoil! Accuracy is an important thing to take into account when choosing the right gun. Some guns have high power yet low accuracy. Usually the weapons with higher rates of fire have the lowest accuracy, such as SMGs and LMGs. The best way to tell accuracy is by looking at the crosshairs when standing still. If the crosshairs are bigger, the weapon is less accurate – this does not apply to shotguns and sniper rifles. When aiming down your sights your gun may still pop up from the recoil. It is possible to use every weapon accurately by controlling the rate of fire manually. Fire fully automatic weapons in bursts when firing long range.

Fire Rate
So your gun has weak power? Counter the weak power with fire rate! Fire rate is the amount of bullets you can put on a target. This is usually counted in rounds per minute or RPM. Automatic guns will always have higher fire rates than bolt or pump action guns. Semi Automatic guns depend on the person shooting them.

Mobility
You have an awesome gun but are as slow as a slug, whats the deal? This is mobility. The bigger the gun, the slower you go usually. The Lightweight perk helps to increase your mobility. Each weapon class gives you a certain amount of mobility. Even secondary weapons have different mobility compared to your primary weapons. Submachine Guns, Shotguns, Pistols, and Special weapons all have the best mobility since they are the lightest. Sniper Rifles and Assault Rifles have medium mobility. Light Machine Guns and Launchers have the lowest mobility since they are the heaviest. To be more accurate: SMGs, Shotguns, and Pistols allow you to move at 100% speed. Sniper Rifles, Assault Rifles, and Specials allow you to move at 95% speed. LMGs and Launchers allow you to move at 87.5% speed.