You start off in a bar. Headshot one of the police men with your handgun. The bartender will throw you an M16 with scope and grenade launcher to go with your ASP. Your objective is to escape the police. Follow Woods and stay low or behind cover. If you’re playing higher difficulties you will be killed quickly so stay behind your men, but not too far. Fight through the streets and take cover in any alcove or alley way if you need to. At the end of the street is an alley to the left. Run in the alley and escape in the car.

After a small cut scene you will be in a different location with the same weapons. Zip line down by standing behind your team mate on the right. At the bottom your team will take down two men. Enter the building to the left to kill the next man. Use a melee attack behind him to perform a special melee. You can pick up his FN FAL if you like. Move on with your team and listen to everything they say. Your objective is to kill Castro, so do it stealthy. Let some trucks pass by across the road. Move up when your men move up. Up the road you will find more enemies. When your team fires you will be clear to fire. One will drop a shotgun (KS-23) which you can pick up. Enter the next building to find a Skorpion, RPK, and RPG. On top of the RPG is intel. 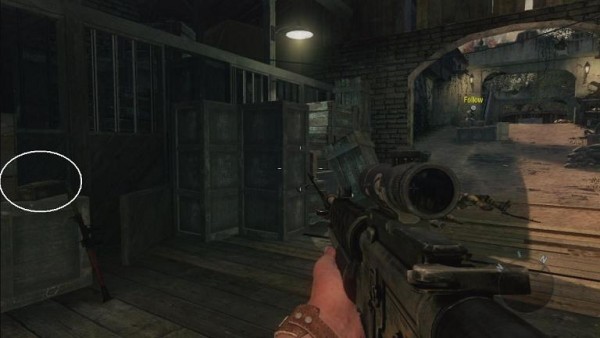 Move on to the house at the other end of the yard. You will encounter another man or two which you or your team will take down. Inside the house are many more enemies. The right hall is guarded by many men, one is looking straight down and can take you out before you can kill him. The best thing to do is take the left path to flank him. At the end is another hall with more people, so stay out of cover. Use your grenades, 40 MM Grenade launcher, and your guns to clear it out. When the halls are clear you will search the rooms. When you enter the rooms you will go into slow motion. Kill everyone you see. The second room holds Castro. You will switch to a pistol automatically and go into slow motion. Take Castro out with a headshot to earn an achievement/trophy.

Escape the house with your team. Follow them wherever they go, but stay behind cover if you’re playing higher difficulties. You will run into the same weapons but with different attachments. Make it to the fire hall way as shown in the picture: 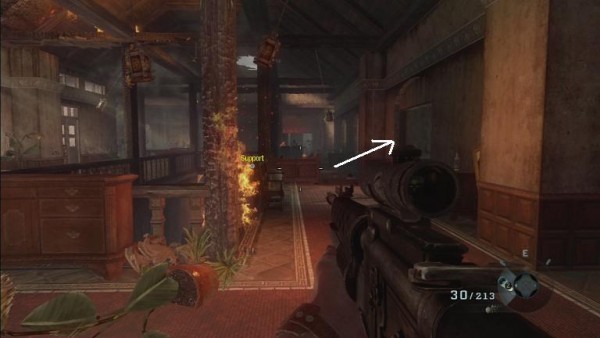 Enter the door on the right and go into the second room to find more intel on the dresser. 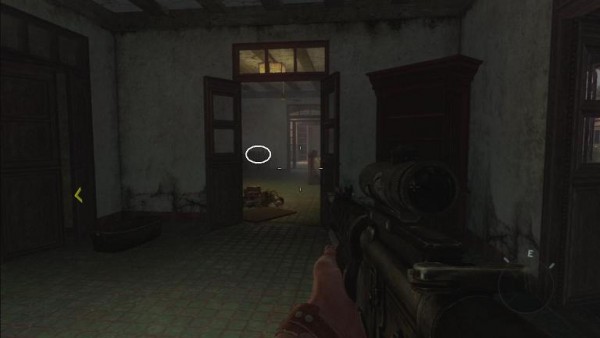 Escape out to the front of the house to find tons of enemies. I threw a frag grenade here and earned the frag master achievement/trophy for killing 5 men with one frag. Take out the machine gun and BTR with any RPGs you find. More friendlies will come to help you out.

Once the area is clear you can run to the left into a sugar field. Rappel down into the airfield. Enter the first airplane hanger and you’ll see a green staircase to your left. Climb up the staircase to find another intel. 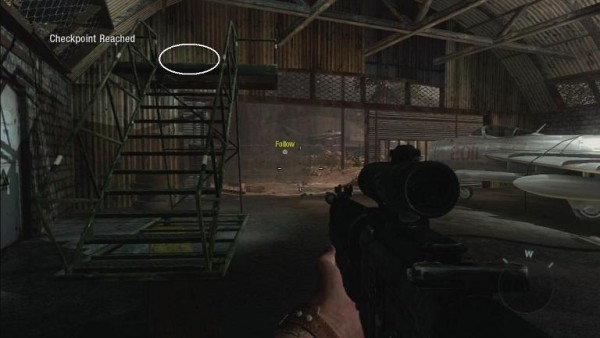 Run across the airfield to the escape plane. Inside the plane you’ll grab a M60 with infinite ammo. Shoot everything around you so your plane can escape. Towards the end your man will jump out and grab a ZPU. Blow the vehicles up at the end of the run way to finish the mission.